clear clutter + create space for what you love


The trees by our front entrance finally finished dropping leaves, which I literally had been having to rake a path to our front door.

As I tackled the dreadful chore of leaf removal, I recognized a few interesting correlations between it and clutter clearing:

I had to drag huge piles of leaves from front of my house to behind the fence in the back. That immediate feeling of ahhhhhhh when I’d dump them, and then walking back with the empty tarp felt pretty incredible. Both walks were identical (the distance, the path) except for the load I was lugging on walk #1.

That’s what it feels like when getting rid of clutter. The lightness it can bring is crazy good. Walk #2 was easier and more enjoyable and that’s what clearing physical clutter (and the other kinds) can do for us.

2. The right tools can make all the difference.

For years I’d bag up leaves or put in garbage container and wheeled to the back. But during our last hurricane we discovered the tarp which made this kind of chore so much more efficient.

Leaves are light so it really wasn’t hard to move. Except when they get wet…

3. Do it now! The longer you ignore, the more it piles up.

I started noticing a trail of leaves I was leaving behind and realized they were coming out of the poorly maintained tarp. We didn’t repair when little holes formed and those small nicks quickly turned into gaping holes. So halfway through, I called it a day and made note to pick up a new one.

Had I either taped up the tiny holes sooner or replaced, the job would’ve been easier AND done that same day.

That’s the thing with clutter. The longer you ignore, the tougher it is to clear it.

While you may be able to hide it under the bed or behind a closed door, you still know it’s lurking. And that nagging can really bring you down…

… which creates a different type of clutter: STRESS!

So, what’s the solution?

It all depends on your goals, budget and how you work best.

4. Sometimes it’s wise to hire it out.

At one point we had a yard guy who came every two weeks but a few summers ago, I gave the job to my oldest. He was very quick to point out that he while he’d love to help out (ha), his shoulder mishap from football would prevent him from raking.

My youngest is now our primary chef and I did NOT want to pull him off of that duty. Believe it or not, I’d rather do yard work than cook :/! So it was on me.

How does this pertain to clutter and organizing?

There are a multitude of free online clutter clearing challenges going on right now, tons of articles and blog posts (including mine!), TV shows (I’m going to check out Netflix’s Tidying Up with Marie Kondo this weekend – have you seen it yet?), the list goes on.

However, if you’ve tried these routes and haven’t been able to make much headway, (don’t beat yourself up if that’s the case btw – it’s very common!) here are two other options:

Option 1: Have a professional organizer (like me:) come in and do it for you.

This is a great choice for those that simply don’t have the time – or desire – to deal with the clutter and want someone else to just handle it for them.

Option 2: We can do it together – a combo DIY + personalized help

This option, coming in February, could be perfect if you’re:

• willing to do the heavy lifting (clearing!) yourself, and

• wanting to know the best way to do it: best + lasting results.

Think of me as your strategic partner / personal cheerleader / accountability coach!

If you’re interested in more info, sign up below to get a sneak peak AND first dibs on this limited space offer: 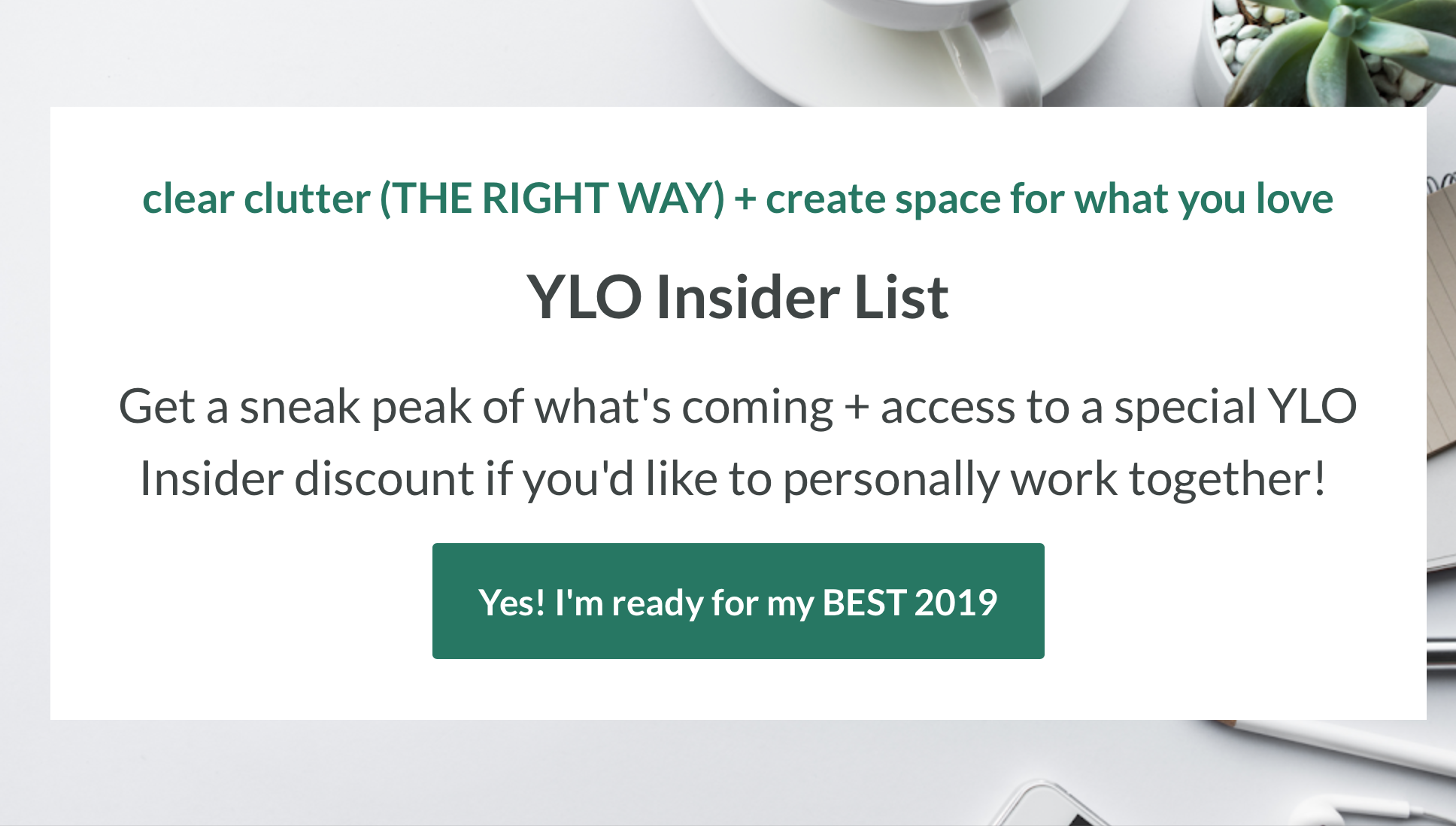 Even the most organized spaces need tweaks and updates, so even if you aren’t needing a complete clutter overhaul, it could be something you’d love. I’M actually looking forward to participating in this option too. I’ll be showing you exactly what I’m doing in my own house. CLICK HERE for more info on how you can do it with me!

Clearing the clutter not only brings immediate relief (like I felt walking back without lugging that huge pile of leaves), it lays the foundation for so much more good stuff.

Speaking of clutter that remains

As you can see from the first pic, I ended up keeping my corded Beats – had to have my music to get through this chore.

I’m surviving… although while tossing a branch over the fence, it caught on to the cord mid throw, tearing my headphones off of my head. For a few seconds that something had jumped out of those leaves and was taking me down:/ Get organized with my weekly planning kit… Yours Free!